I started singing around camp fires when I was a Boy Scout. Me and my friends Mick Bird and Paul Capper would compete to see who could sing the loudest. It was usually a dead heat between me and Paul.

I bought the customary Eko Ranger 6 guitar for £35 from Kay’s Catalogue when I was about 15. Bought a blue denim jacket and “Donovan” cap, learned everything I could by Dylan, Donovan, Phil Ochs and Tom Paxton and started doing floor spots at most of the many folk clubs in Birmingham.

Pig’N’Wissul was the first band I sang in at the end of the 60’s. Strange mixture of blues, traditional folk, pop songs and country and western which reflected the diverse and eventually incompatible tastes of the members. Fortunately Ray and Phil are still friends but lost track of Dave. 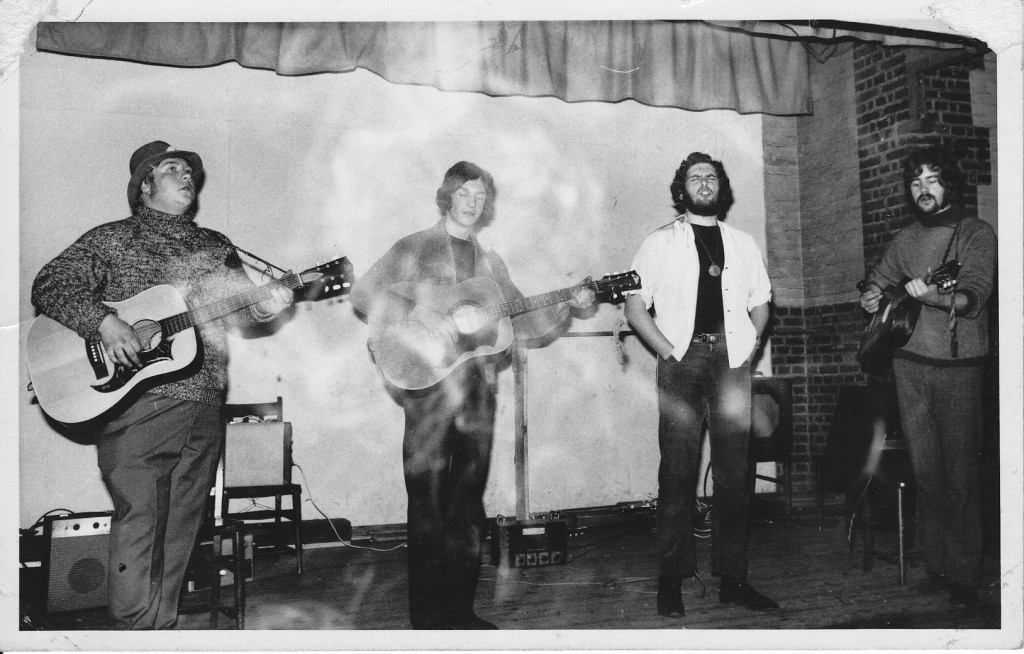 In 1970 I went off to University College London and played solo, busking or doing floor spots and the odd paid gig.

Wrote my first song in late 1970 and last in 1973. The last of these, “The Ship” still gets played regularly, one or two others occasionally and the rest seldom if ever.  My overriding feeling with these songs now is that someone else wrote them, and I guess that’s true.

When I returned to Birmingham to start work I met up with Maryse, who would be my first wife and also part of the next two bands I played in.

Trilogy was a covers band, with a big focus on Richard Thompson songs but also Dylan and other good stuff. It lasted from 1976 to about 1981. Members included Mike Halstead, who we lost a few years back; Phil Knowles and John Davis who is back playing with me in my latest band. I wrote no songs during this time.

When Trilogy folded it was replaced by Witches Brew which added John Sullivan on English Concertina and mandoline. Much the same covers as before but with plenty of tunes from John S and a meatier sound all round. 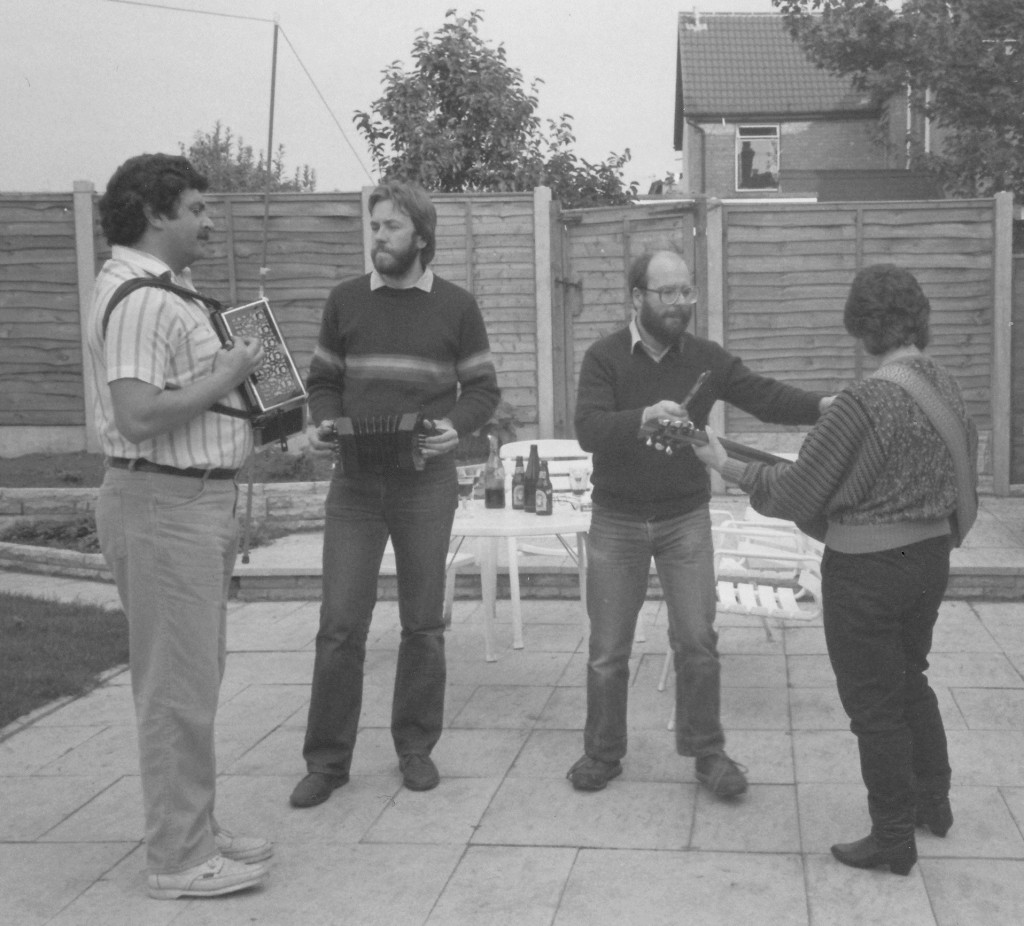 This lasted from 1982 to the early 90’s during which time I wrote just 2 songs, “Devil’s Diamond” and “The Young Man’s Song”, neither of which were played by Witches Brew and both of which are still usually part of my set although much changed. 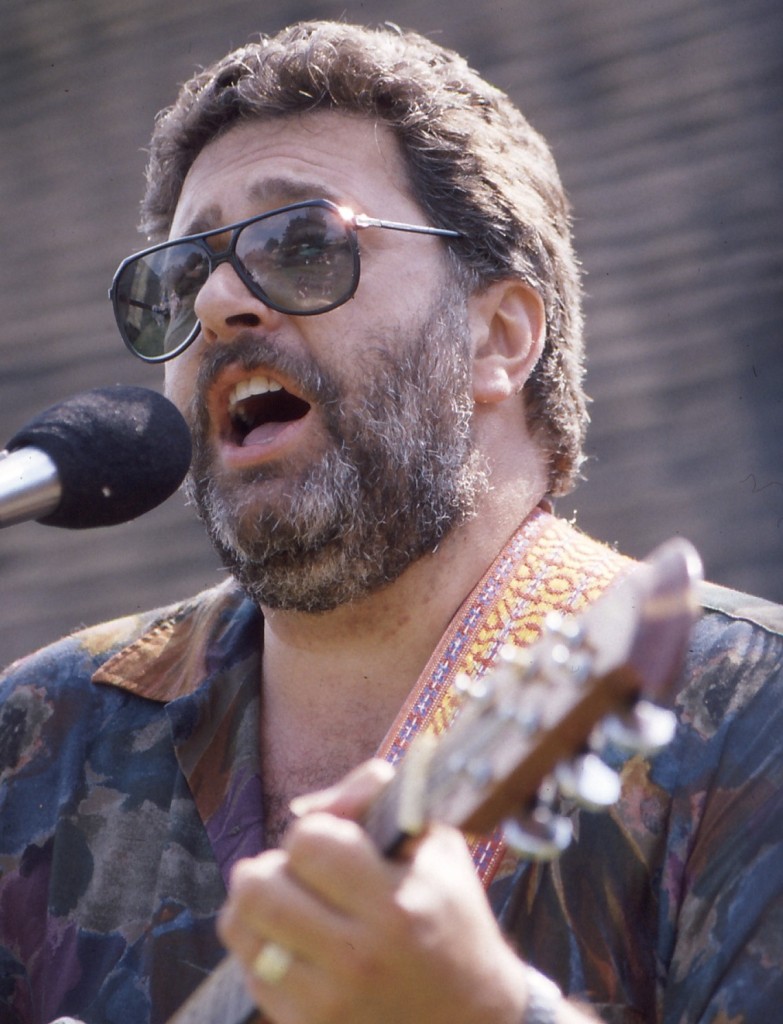 All through my life I have loved Irish music, probably because I grew up with it being raised in a primarily Irish part of Birmingham. I met Tommy Dempsey in the 60s and had played with him in sessions all my life. So when Witches Brew was fizzling out I jumped at the chance to play in Tommy’s Band. Dempsey’s Lot was a hard working band and quite rewarding financially. I played mainly banjo, bouzouki and mandolin so songwriting played no part.

I’d lived in Bromsgrove, Worcestershire from 1978 to 2004. But when my marriage to Maryse finished I quickly met Brigid and moved to Bromyard in Herefordshire where we still live very happily. I also made an amicable break with Dempsey’s Lot and this has led to a fresh start in songwriting.

At first, 2004 to 2006, I played in pub sessions, plus the odd solo gig playing covers. 60’s stuff if the audience wanted it, Irish if that was required and more thoughtful stuff in the folkier venues. And then I started to slip in a couple of my old songs and as they went down well, eventually started writing the odd new one.

A few of us would play small festivals as “Tony Burt & Friends” and local concerts mixing covers with my stuff and I started to get the bug for writing again. 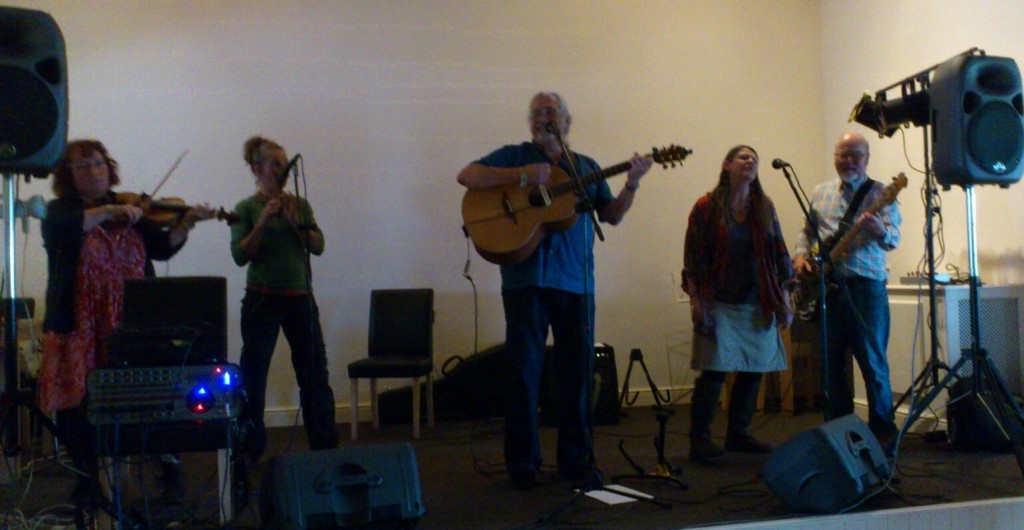 A few years ago I decided to scale down pub gigs, forced myself to forget American Pie and the Boxer, and focus on my music. I also booked myself onto a songwriting workshop with Steve Tilston and Christine Collister at a remote retreat north of Loch Ness, Moniack Mhor. This gave me massive impetus and a lot more skills and this was topped up in 2014 with an equally momentous experience in the same place with Boo Hewerdine and Edwina Hayes.

I now have a full repertoire of original songs, two terrific musicians backing me in Allyson Craigan and John Davis, and continue to write regularly, having also recently discovered the pleasure of co-writing with people I met at Moniack Mhor.

That’s it up to now! Lots more I could have mentioned and much more to come!